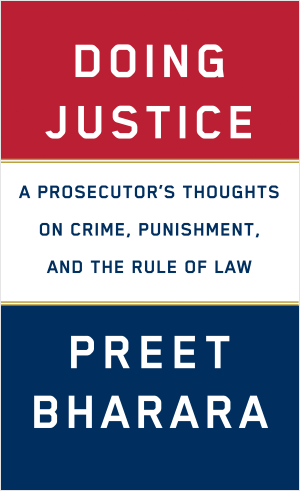 A Prosecutor’s Thoughts on Crime, Punishment, and the Rule of Law 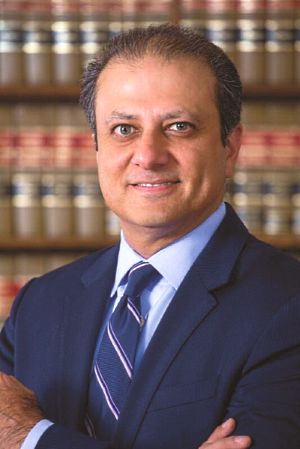 By the one-time federal prosecutor for the Southern District of New York, Doing Justice: A Prosecutor’s Thoughts on Crime, Punishment, and the Rule of Law is an important overview of the way our justice system works, and why the rule of law is essential to our society. Using case histories, personal experiences and his own inviting writing and teaching style, Preet Bharara shows the thought process we need to best achieve truth and justice in our daily lives and within our society.

Bharara uses anecdotes and case histories from his legal career – the successes as well as the failures – to illustrate the realities of the legal system, and the consequences of taking action (and in some cases, not taking action, which can be just as essential when trying to achieve a just result).

Much of what Bharara discusses is inspiring – it gives us hope that rational and objective fact-based thinking, combined with compassion, can truly lead us on a path toward truth and justice. Some of what he writes about will be controversial and cause much discussion. Ultimately, Doing Justice is a thought-provoking, entertaining book about the need to find the humanity in our legal system – and in our society.

PREET BHARARA served as U.S. Attorney for the Southern District of New York from 2009 to 2017. Bharara oversaw the investigation and litigation of all criminal and civil cases and supervised an office of more than two hundred Assistant U.S. Attorneys, who handled cases involving terrorism, narcotics and arms trafficking, financial and healthcare fraud, cybercrime, public corruption, gang violence, organized crime, and civil rights violations. In 2017, Bharara joined the NYU School of Law faculty as a Distinguished Scholar in Residence. He is the Executive Vice President of Some Spider Studios and the host of CAFE’s Stay Tuned with Preet, a podcast focused on issues of justice and fairness. Bharara graduated magna cum laude from Harvard College and from Columbia Law School, where he was a member of the law review.

KATY TUR is an NBC News Correspondent and anchor of the 2 p.m. ET hour of “MSNBC Live.” A dogged journalist, Tur emerged as a breakout broadcaster in 2016 while covering the entirety of the Trump campaign across all platforms for NBC News and MSNBC.

Tur released Unbelievable: My Front-Row Seat to the Craziest Campaign in American History in September 2017, which debuted on the New York Times bestseller list.

Tur is known for her resolute reporting style and for her determination to chase the facts. She has also earned a reputation for holding government officials accountable for their statements, accusations, and actions. During her hour of “MSNBC Live,” Tur aims to give viewers immediate analysis and reaction to the daily White House press briefing in addition to diving deep into the day’s news stories.

In her 18 months covering the 2016 presidential election, Tur conducted multiple in-depth interviews with then-candidate Donald Trump from his campaign headquarters. While on the road, she set foot in over 40 states and logged nearly 4,000 live television appearances. In 2017, Tur received the Walter Cronkite Award for Excellence in Television Political Journalism for her reporting on the election.

Prior to joining the 2016 political team, Tur was a foreign correspondent based in London for NBC News. She joined the network in 2012 and was initially based in New York. Before that Tur reported for WNBC, The Weather Channel, WPIX and News12 Brooklyn.

A native of Los Angeles and graduate of the University of California Santa Barbara, Tur now lives in NYC with her husband and new baby boy, Teddy.