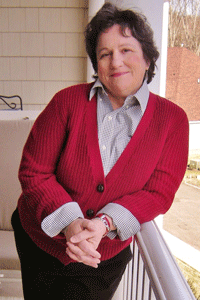 Amy Ellis Nutt grew up in Scotch Plains, New Jersey. She graduated from Smith College and has master’s degrees in philosophy from M.I.T. and in journalism from Columbia University. In 2011 she won the Pulitzer Prize in feature writing while at New Jersey’s The Star-Ledger newspaper. She is the author of three works of non-fiction, including the New York Times bestseller and a People magazine top-10 book of 2015, Becoming Nicole: The Transformation of an American Family. Nutt is currently a science writer at the Washington Post. Her beat is the brain.

When Wayne and Kelly Maines adopted identical twin boys, they thought their lives were complete. But they soon noticed a marked difference between Jonas and his brother, Wyatt. In the years that followed, the Maineses came to question their long-held views on gender and identity, to accept and embrace Wyatt’s transition to Nicole, and to undergo an emotionally wrenching transformation of their own that would change all their lives forever. This is an inspiring true story of an American family confronting an issue that is at the center of today’s debate on gender identity.