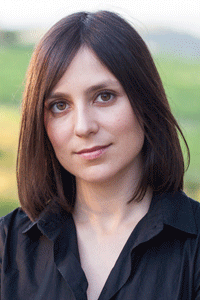 Bianca Bosker is an award-winning journalist who has written about food, wine, architecture, and technology for The New Yorker online, The Atlantic, T: The New York Times Style Magazine, Food & Wine, The Wall Street Journal, The Guardian, and The New Republic. The former executive tech editor of The Huffington Post, she is the author of the critically acclaimed book Original Copies: Architectural Mimicry in Contemporary China. She lives in New York City.

MFOB FEATURED BOOK: Cork Dork: A Wine-Fueled Adventure Among the Obsessive Sommeliers, Big Bottle Hunters, and Rogue Scientists Who Taught Me to Live for Taste

Professional journalist and amateur drinker Bianca Bosker didn’t know much about wine—that is, until she became intoxicated with an alternate universe where taste reigns and elite sommeliers dedicate their lives to the pursuit of flavor. With boundless curiosity, humor, and a healthy dose of skepticism, Bosker takes the reader inside underground tasting groups, exclusive New York City restaurants, California mass-market wine factories, and even a neuroscientist’s fMRI machine as she attempts to answer the most nagging question of all: what’s the big deal about wine? What she learns will change the way you drink wine—and, perhaps, the way you live—forever.

{{Blog sites are an excellent way to share your ideas and concepts with the globe. They are likewise a great way to build your personal brand.

I love your blog.. very nice colors & theme. Did you create this website yourself or did you hire someone to do it for you? Plz reply as I’m looking to construct my own blog and would like to find out where u got this from. many thanks|