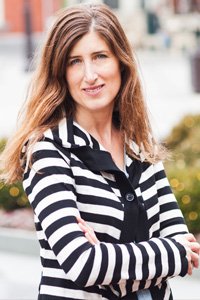 Carolyn Mackler is also the author of the popular YA novels The Earth, My Butt, and Other Big Round Things (a Michael L. Printz Honor Book), Tangled, Guyaholic, Vegan Virgin Valentine, and Love and Other Four-Letter Words. Carolyn’s novel The Future of Us, co-written with best-selling author Jay Asher, received starred reviews and appeared on numerous best-seller lists. Her first middle-grade novel, Best Friend Next Door, came out in 2015. Carolyn lives in New York City with her husband and two sons.

MFOB FEATURED BOOK: Infinite in Between

They met at freshman orientation and made a promise to reunite at graduation. But a lot happens in four years of high school. Gregor is quietly, desperately in love with Whitney until a tragedy transforms his world. Zoe is running from everything: her celebrity mom, a public scandal, a long-held family secret, and, ultimately, herself. Jake has a crush on his best friend, Ted. Beautiful Whitney seems to have it together, but looks can be deceiving. And Mia watches them all but doesn’t say a word until it’s almost too late. Five teenagers. Four years. An unforgettable journey.

To the morristownbooks.org owner, You always provide useful tips and best practices.

Dear morristownbooks.org webmaster, Your posts are always on point.

To the morristownbooks.org webmaster, Your posts are always well presented.

To the morristownbooks.org webmaster, You always provide helpful information.