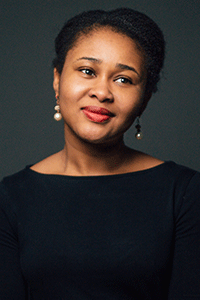 Chinelo Okparanta was born and raised in Port Harcourt, Nigeria. Among her many honors are two Lambda Literary Awards, the 2016 Jessie Redmon Fauset Book Award in Fiction, the 2016 inaugural Betty Berzon Emerging Writer Award, and a 2014 O. Henry Award. She has published work in The New Yorker, Granta, Tin House, the Kenyon Review, AGNI, and other venues, and was named one of Granta’s six New Voices for 2012. In 2017, Okparanta was named one of Granta’s Best of Young American Novelists.

Ijeoma comes of age as her nation does; born before independence, she is 11 when civil war breaks out in the young republic of Nigeria. Sent away to safety, she meets another displaced child and they, star-crossed, fall in love. They are from different ethnic communities. They are also both girls. When their love is discovered, Ijeoma learns that she will have to hide this part of herself. But there is a cost to living a lie. Inspired by Nigeria’s folktales and its war, Under the Udala Trees uses one woman’s lifetime to examine the ways in which Nigerians continue to struggle toward selfhood and reconcile the dangers of living and loving openly.

Blogs can be developed utilizing free blogging platforms such as WordPress, Tumblr, as well as Blogger. These systems permit you to create an account and also start blogging as soon as possible with no technical knowledge of coding or style.

I’ve been absent for a while, but now I remember why I used to love this site. Thank you, I will try and check back more often. How frequently you update your web site?

we will always be grateful to you and will share your hard-written article with our friends too.