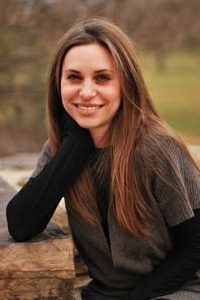 Courtney Sheinmel has authored over a dozen highly celebrated books for kids and teens, including the Stella Batts series for young readers, the YA novel, Edgewater, and a new middle grade series, The Kindness Club, that will be published in November. Courtney served as a judge on the national level for the Scholastic Art & Writing Awards, and received a National Scholastic Outstanding Educator Award for her work as a writing instructor at Writopia Lab. Courtney lives in New York City.

Stella Batts is excited. Her class is having a sleepover in the library. Everyone is in pajamas, even the teachers. The kids break off into groups to go on a scavenger hunt. That’s when Stella finds a really old book by an author who is also named Stella B. Though the subject matter is nothing this Stella would ever write about. And then there’s an unexpected visitor who shows up in the middle of the night. Stella doesn’t know what to think but she knows one thing for sure–she’s scared of the dark now!

Blogs are a wonderful way to share your thoughts and also concepts with the world. They are also a wonderful method to construct your personal brand.A blog site is a website that contains short articles or messages on a certain topic. Blogs can be used for individual usage, business use, or both.

She is one of my favorite authors

When I need to think about these things I will definitely come back here.

You’ve truly intrigued me today. I trust you’ll keep on doing as such! Additionally, actually look at our site.

You are a talented writer and blog writer that consistently produces quality posts with useful information.

This is a really good post, I’m impressed. Using online tools is a great way to experience new things about gaming. Crosshair generator is a very useful tool for aim game players. It helps you to customize your crosshairs as per your needs and likings, which can give you an advantage over other contenders. Know more about it in the related blog.

I really want to see more posts and blogs from this website. So, I have followed your webpage for future reference.

To the morristownbooks.org webmaster, Your posts are always well-delivered and engaging.