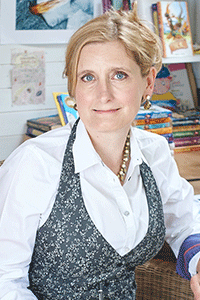 Cressida Cowell is the award-winning author and illustrator of the best-selling How to Train Your Dragon series, which has sold over 4 million copies in the US and was the inspiration for the popular animated films. Cressida grew up in London and on a small, uninhabited island off the west coast of Scotland, where she spent her time writing stories, fishing for things to eat, and exploring the island looking for dragons. She was convinced that there were dragons living on the island and has been fascinated by them ever since.

In the first book of a new series by the internationally best-selling author of How to Train Your Dragon, the warring worlds of Wizards and Warriors collide in a thrilling and enchanting adventure. Xar, a 12-year-old wizard prince, and Wish, a 12-year-old warrior princess, have far more in common than anyone would expect of mortal enemies. Xar is a wizard without magic in a world where magic is everything, and Wish is a warrior with a magical object in a world where magic is reviled and illegal. When they meet in the wildwood, on the trail of a deadly witch, it’s the start of a grand adventure that just might change the fabric of their worlds.