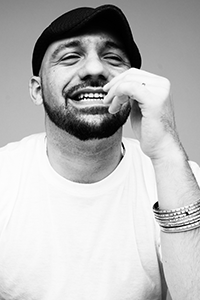 Daniel José Older is the New York Times best-selling author of the young adult series, Shadowshaper Cypher, the Bone Street Rumba urban fantasy series, a ghost-noir collection called Salsa Nocturna, and the upcoming middle-grade sci-fi adventure, Flood City. He won the International Latino Book Award and has been nominated for several other awards, including the Kirkus Prize and the World Fantasy Award.

Sierra and her friends love their new lives as shadowshapers, making art and creating change with the spirits of Brooklyn. Then, one day, Sierra receives a strange card depicting a beast called the Hound of Light––an image from the enigmatic, influential Deck of Worlds. When the real Hound begins to stalk Sierra through the streets, the shadowshapers know their next battle has arrived. Sierra must take down the Hound and master the Deck of Worlds … or risk losing it all.