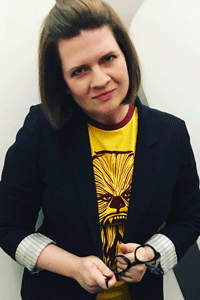 Emmy Laybourne writes about good kids in dangerous situations. Her Monument 14 trilogy has sold over a quarter-million copies in the United States, has been translated into 12 languages, and was optioned for film development by Strange Weather Films. Her latest books, Berserker and Ransacker (to be released in January 2019) tell the story of a family of Norwegian teens with ancient Viking powers.

Ancient powers. Strong love. Desperate times. Hanne would give anything to be free of the ancestral Viking curse that overcomes her when she or anyone she loves is in danger. She becomes a Berserker―an elegant, graceful and shameless killer. When she kills three men attacking their father, Hanne and her siblings must flee Norway and head to the American frontier, on a desperate search for their uncle, the one man who can help Hanne learn to control her powers.