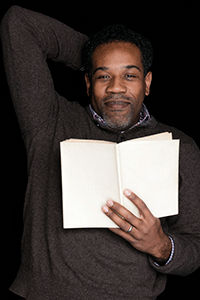 Gregory Pardlo’s collection Digest won the 2015 Pulitzer Prize for Poetry. Digest was also nominated for an NAACP Image Award, named a standout book by the Academy of American Poets, a New York Times best poetry book of the year, and a finalist for the Hurston Wright Legacy Award and INDIEFAB Book of the Year Award. Pardlo’s other honors include fellowships from the Guggenheim Foundation, the National Endowment for the Arts, and the New York Foundation for the Arts.

MFOB FEATURED BOOK: Air Traffic: A Memoir of Ambition and Manhood in America

Gregory Pardlo’s father was a brilliant and charismatic man—a leading labor organizer who presided over a happy suburban New Jersey family of four. But when he lost his job following the famous air traffic controllers’ strike of 1981, he succumbed to addiction and exhausted the family’s money on ostentatious whims. Struggling to distinguish himself on his own terms, young Gregory rebels and hustles off to Marine Corps boot camp. He moves across the world, returning to the United States only to take a job as a manager-cum-barfly at his family’s jazz club. Air Traffic follows Gregory as he builds a life that honors his history without allowing it to define his future. Slowly, he embraces the challenges of being a poet, a son, and a father as he enters recovery for alcoholism and tends to his family. In this memoir, written in lyrical prose, Gregory tries to free himself from the overwhelming expectations of race and class, and from the tempting yet ruinous legacy of American masculinity.

The initial movie launched was Iron Guy in 2008, adhered to by The Amazing Hunk, Iron Guy, Thor, Captain America: The First Avenger, and then Wonder’s The Avengers. Every one of these flicks were consulted with important recognition and also ticket office success.

Horrible publish but , I was real yearning for to know in the event you may well write down a litte supplementary on this branch of learning? Documents remain very grateful if you might elaborate a small amount added. Bless