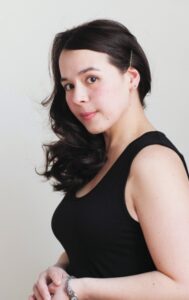 Heidi grew up in Hawaii where she rode horses and raised peacocks, and then she moved to New York City and grew up even more, as one tends to do. Her favorite thing, outside of writing, is travel, and she has haggled for rugs in Morocco, hiked the trails of the Ko’olau Valley, and huddled in a tent in Africa while lions roared in the dark. She holds an M.F.A. from New York University in Musical Theatre Writing, of all things, and she’s written books and lyrics for shows including The Time Travelers Convention, Under Construction, and The Hole. She lives in Brooklyn with her husband, her son, and their pet snake.

MFOB FEATURED BOOK: A Kingdom for a Stage

Caught in a war between the rebels and the invading colonizers, Jetta must make an impossible choice — save her people or protect her sanity.

The second book in Heidi Heilig’s acclaimed Shadow Players trilogy blends traditional storytelling with ephemera to weave an enthralling fantasy that fans of Leigh Bardugo and Sabaa Tahir will sink into.

Jetta is a wanted criminal. The army wants her for treason against the crown, for the sabotage of Hell’s Court temple, and for the murder of General Legarde. They also want her for the power in her blood — the magic that captures wandering spirits to give life to puppets, to rocks, to paper … to weapons. They’re willing to trade the elixir that treats Jetta’s madness for the use of her blood. The rebels want her, too, to help them reclaim their country.

Jetta may be the one who can tip the scales in this war. But Jetta fears using her power will make her too much like Le Trepas, the terrifying and tyrannical necromancer who once held all Chakrana under his thumb — and who is Jetta’s biological father. She’s already raised her brother from the dead, after all. And scared off Leo, the only person who saw her as she truly is.

With Le Trepas at large and a clash between the army and the rebels becoming inevitable, Jetta will have to decide if saving her country is worth sacrificing her soul.