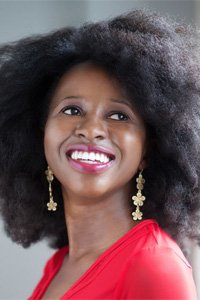 Imbolo Mbue is a native of Limbe, Cameroon. She holds a B.S. from Rutgers University and an M.A. from Columbia University. A resident of the United States for over a decade, she lives in New York City. Behold the Dreamers is her first novel.

MFOB FEATURED BOOK: Behold the Dreamers (to be published August 2016)

Jende Jonga, a Cameroonian immigrant living in Harlem, can’t believe his luck when, in the fall of 2007, he is hired as a chauffeur by a Lehman Brothers executive. But the world of great power and privilege conceals troubling secrets and when the financial world is rocked by the collapse of Lehman Brothers, the Jongas are so desperate to keep Jende’s job that they are forced to make an impossible choice—one that will threaten their marriage. Mbue tackles marriage, immigration, class, race, and the trapdoors in the American Dream in her debut novel.