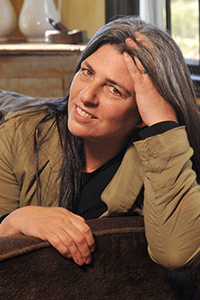 Jean Hanff Korelitz was born and raised in New York and graduated from Dartmouth College and Clare College, Cambridge. She is the New York Times best-selling author of five novels and creator of BOOKTHEWRITER, a New York City-based service that sends authors to book groups. In 2016, she and her husband (Irish poet and professor Paul Muldoon) adapted and co-produced “The Dead, 1904,” an immersive adaptation of James Joyce’s “The Dead,” for New York’s Irish Repertory Theatre.

Naomi Roth is the first female president of Webster College, a once conservative school now known for producing fired-up, progressive graduates. So Naomi isn’t surprised when Webster students begin the fall semester with an outdoor encampment to protest a popular professor’s denial of tenure. A former student radical herself, Naomi admires the protestors’ passion, especially when her own daughter, Hannah, joins their ranks. When Omar Khayal, a charismatic Palestinian student with a devastating personal history, emerges as the group’s leader, the demonstration slips beyond Naomi’s control, and she is forced to take increasingly desperate measures to protect her friends, colleagues, and family from an unknowable adversary.