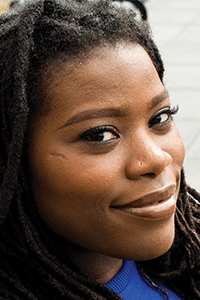 Kaitlyn Greenidge’s debut novel, We Love You, Charlie Freeman, was published in March. Her writing has appeared in The New York Times, Elle.com, Buzzfeed, Transition Magazine, Virginia Quarterly Review, The Believer, American Short Fiction, and other places. She is a contributing writer for LENNY Letter. She received her master of fine arts from Hunter College. Originally from Boston, Kaitlyn now lives in Brooklyn.

The Freeman family––Charles, Laurel, and their daughters, teenage Charlotte and 9-year-old Callie––have been invited to the Toneybee Institute in rural Massachusetts to participate in a research experiment. Living in an apartment on campus with Charlie, a young chimp abandoned by his mother, they are instructed to teach him sign language and welcome him as a member of their family. But the Freemans find themselves isolated in their new, nearly all-white community––not just by their race, but by their strange living situation. And when Charlotte discovers the truth about the Institute’s history of questionable studies, the secrets of the past begin to invade the present.

Blogs can be produced using free blog writing platforms such as WordPress, Tumblr, and also Blog writer. These systems enable you to produce an account and start blogging as soon as possible with no technical knowledge of coding or design.