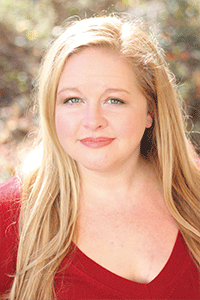 Kate Quinn is a native of Southern California. She attended Boston University, where she earned a bachelor’s and master’s degree in classical voice. A lifelong history buff, she has written four novels in the Empress of Rome series and two books set in the Italian Renaissance detailing the early years of the infamous Borgia clan. All have been translated into multiple languages. She and her husband now live in San Diego with two black dogs named Caesar and Calpurnia.

1947: In the chaotic aftermath of World War II, American college girl Charlie St. Clair is pregnant, unmarried, and on the verge of being thrown out of her very proper family. She’s also nursing a desperate hope that her beloved cousin Rose, who disappeared in Nazi-occupied France during the war, might still be alive. So when Charlie’s parents banish her to Europe to have her “little problem” taken care of, Charlie breaks free and heads to London, determined to find out what happened to the cousin she loves like a sister. 1915: A year into the Great War, Eve Gardiner burns to join the fight against the Germans and unexpectedly gets her chance when she’s recruited to work as a spy. Sent into enemy-occupied France, she’s trained by the mesmerizing Lili, the “Queen of Spies,” who manages a vast network of secret agents right under the enemy’s nose. Thirty years later, haunted by the betrayal that ultimately tore apart the Alice Network, Eve spends her days drunk and secluded in her crumbling London house. Until a young American barges in, uttering a name Eve hasn’t heard in decades, and launches them both on a mission to find the truth . . . no matter where it leads.

Marvel films are a fantastic method to invest your free time. They have lots of action, adventure, and also wit. You can enjoy them on the internet for free on Wonder’s web site.The Marvel Cinematic World is a series of superhero films based on characters that appear in comic books released by Wonder Comics. The MCU is the shared universe in which every one of the movies are established.

Incredible story there. What happened after? Thanks!

That is a very good tip especially to those fresh to the blogosphere.
Simple but very precise information… Thank you for sharing this one.

A must read article!

Stop by my web site: tracfone

I loved as much as you will receive carried out right here.

The sketch is attractive, your authored subject matter stylish.
nonetheless, you command get got an edginess over that you wish be delivering the following.
unwell unquestionably come more formerly again as exactly the
same nearly a lot often inside case you shield this hike.

Here is my page – tracfone coupon

To the morristownbooks.org administrator, Great job!

Historical fiction author Kate Quinn is a New York Times and USA Today best-selling figure. She is a southern California native who attended Boston University and majored in classical voice while there. Before turning to the 20th century with The Alice Network and The Huntress, she wrote four novels in the Empress of Rome Saga and two books about the Italian Renaissance.