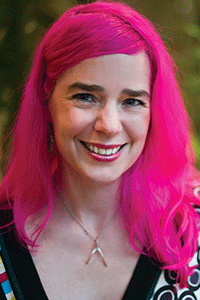 Morristown Festival of Books is thrilled to have Laini Taylor join us as our featured YA author!

Laini Taylor is the New York Times best-selling author of the Printz Honor book Strange the Dreamer. Its highly anticipated sequel, Muse of Nightmares, will release October 2018. Taylor is also the author of the global sensation Daughter of Smoke and Bone Trilogy and the companion novella, A Night of Cake & Puppets (Daughter of Smoke and Bone). Taylor’s other work includes the National Book Award finalist Lips Touch: Three Times. She lives in Portland, Oregon, with her husband, illustrator Jim Di Bartolo, and their daughter, Clementine.

In the wake of tragedy, neither Lazlo nor Sarai are who they were before. One a god, the other a ghost, they struggle to grasp the new boundaries of their selves as dark-minded Minya holds them hostage, intent on vengeance against Weep. Lazlo faces an unthinkable choice—save the woman he loves, or everyone else?—while Sarai feels more helpless than ever. But is she? Sometimes, only the direst need can teach us our own depths, and Sarai, the muse of nightmares, has not yet discovered what she’s capable of. As humans and godspawn reel in the aftermath of the citadel’s near fall, a new foe shatters their fragile hopes, and the mysteries of the Mesarthim are resurrected: Where did the gods come from, and why? What was done with thousands of children born in the citadel nursery? And most important of all, as forgotten doors are opened and new worlds revealed, you wonder: Must heroes always slay monsters, or is it possible to save them instead? Love and hate, revenge and redemption, destruction and salvation all clash in this gorgeous sequel to the New York Times best seller, Strange the Dreamer.

I have been browsing online more than 4 hours today, yet I
never found any interesting article like yours.

It is pretty worth enough for me. In my opinion, if all webmasters and bloggers made good
content as you did, the web will be a lot more useful than ever before.

Hi it’s me, I am also visiting this site on a regular basis, this web site
is in fact fastidious and the visitors are
truly sharing pleasant thoughts.

Your mode of telling all in this article is really pleasant,
all be able to simply know it, Thanks a lot.

Have you ever considered writing an e-book or guest authoring on other sites?
I have a blog based upon on the same topics you discuss and would really like
to have you share some stories/information. I know my readers would enjoy your work.
If you are even remotely interested, feel free to send me an e-mail.

It’s not my first time to pay a visit this web page, i am browsing this web page dailly
and take pleasant information from here all the time.

Useful info. Fortunate me I found your site by chance, and I am shocked
why this coincidence didn’t took place in advance!
I bookmarked it.

You are so cool! I don’t think I’ve truly read through something
like this before. So nice to find someone with a few original thoughts on this subject.
Seriously.. many thanks for starting this up. This site is
one thing that is required on the internet, someone with
a bit of originality!

Hello! I know this is sort of off-topic but I needed to ask.
Does building a well-established blog like
yours take a large amount of work? I am brand new to writing a blog but I do write in my diary
on a daily basis. I’d like to start a blog so I can share my personal experience and
feelings online. Please let me know if you have any recommendations or tips for new aspiring blog owners.
Thankyou!

If you desire to improve your familiarity simply keep visiting this web
page and be updated with the newest news update posted here.

Thanks to my father who informed me regarding this weblog, this website is in fact awesome.

Thanks in favor of sharing such a nice thinking, post is good, thats why i have read it
entirely

Magnificent beat ! I would like to apprentice while you amend your
site, how can i subscribe for a blog website? The account helped
me a acceptable deal. I had been a little bit acquainted of this your broadcast provided bright
clear concept

I was suggested this web site by my cousin. I am not sure whether this
post is written by him as no one else know such
detailed about my trouble. You are amazing! Thanks!

hi!,I like your writing very much! proportion we be in contact more approximately your post
on AOL? I require an expert in this space to unravel my problem.
May be that is you! Looking forward to peer you.

Blog sites can be produced using complimentary blogging platforms such as WordPress, Tumblr, and Blogger. These systems enable you to develop an account and begin blogging right away without any technical knowledge of coding or layout.

It’s genuinely very difficult in this full of activity life to listen news on TV, so I only use web for that purpose, and take the most up-to-date news.

Very descriptive blog, I loved that a lot. Will there be a part 2?|Excellent post. I used to be checking constantly this weblog and I’m impressed! Extremely helpful information specifically the final section :) I deal with such information much. I was looking for this particular info for a long time. Thanks and best of luck. |

Hi! I just wanted to ask if you ever have any problems with
hackers? My last blog (wordpress) was hacked and I ended up losing many months of hard work due
to no backup. Do you have any solutions to prevent hackers?

I’ve learn some excellent stuff here. Definitely value bookmarking for revisiting.
I wonder how so much effort you set to create one of these
fantastic informative website.

Pretty! This has been an incredibly wonderful article. Thank
you for providing this information.

Hi there to every one, the contents present at this web
page are really remarkable for people knowledge, well, keep up the good work fellows.

I am sure this article has touched all the internet users, its
really really fastidious piece of writing on building up new weblog.

My relatives always say that I am wasting my time here at web, however I know I am getting
experience everyday by reading thes good content.

When I originally commented I clicked the
“Notify me when new comments are added” checkbox and now each
time a comment is added I get several emails
with the same comment. Is there any way you can remove people from that service?

If you are going for finest contents like me, just go to see this web page all the time since it presents quality contents,
thanks

Thanks for the good writeup. It actually used to be a enjoyment account it.
Glance complex to far introduced agreeable from you! By the way, how could we be in contact?

This is my first time visit at here and i am truly pleassant to read all at alone
place.

Wow that was unusual. I just wrote an incredibly long comment but after I
clicked submit my comment didn’t appear. Grrrr…
well I’m not writing all that over again. Anyhow, just wanted to say excellent blog!

You can certainly see your skills in the work you write.

The world hopes for more passionate writers
such as you who aren’t afraid to mention how they believe.
All the time follow your heart.

Hello mates, how is all, and what you would like to say concerning this paragraph, in my view its in fact amazing
in support of me.

What’s up everybody, here every person is sharing such know-how, so it’s nice
to read this webpage, and I used to pay a visit this blog everyday.

I’m more than happy to discover this page. I wanted to thank you for ones
time just for this fantastic read!! I definitely loved every little bit of
it and i also have you saved as a favorite to look at new
information on your site.

I was recommended this website by my cousin. I’m not sure whether
this post is written by him as no one else know such detailed about my problem.
You’re incredible! Thanks!

Please let me know if you’re looking for a article writer for your
blog. You have some really good posts and I think I would be a good
asset. If you ever want to take some of the load off, I’d love to write some articles for your blog in exchange for a link back to
mine. Please send me an e-mail if interested. Regards!

Yesterday, while I was at work, my sister stole my iPad and tested to see if
it can survive a 25 foot drop, just so she can be
a youtube sensation. My apple ipad is now broken and she has 83 views.
I know this is entirely off topic but I had to share it with someone!