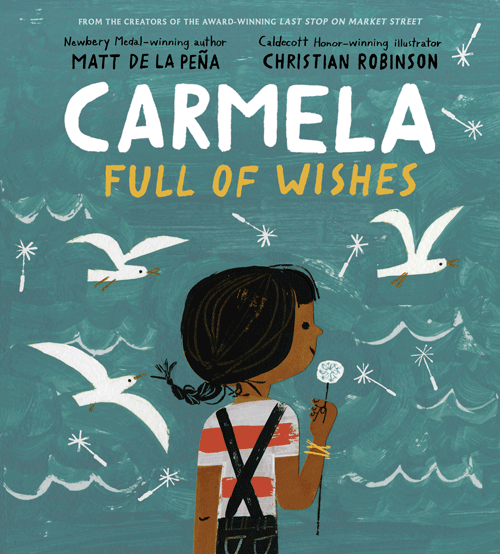 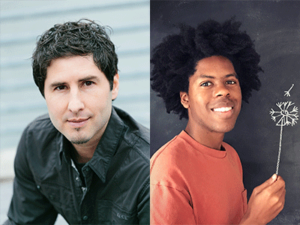 Morristown Festival of Books is thrilled to have Matt de la Peňa & Christian Robinson join us at KidFest!

In their first collaboration since the Newbery Medal- and Caldecott Honor-winning Last Stop on Market Street, Matt de la Peña and Christian Robinson deliver a moving ode to family, to dreamers, and to finding hope in the most unexpected places.

Matt de la Peña is the #1 New York Times bestselling, Newbery Medal-winning author of five picture books (including Last Stop on Market Street, Love, and the upcoming Carmela Full of Wishes) as well as six critically acclaimed young adult novels. In 2016, he was awarded the NCTE Intellectual Freedom Award. He received his MFA in creative writing from San Diego State University and his BA from the University of the Pacific, where he attended school on a full athletic scholarship for basketball. He lives in Brooklyn, NY with his family. Visit him online at mattdelapena.com.

Christian Robinson is a 2016 Caldecott Honoree and also received a Coretta Scott King Illustrator Honor for his art in Last Stop on Market Street, which was a #1 New York Times best seller. His picture books include the Gaston and Friends series; Leo: A Ghost Story; School’s First Day of School; The Smallest Girl in the Smallest Grade; Josephine: The Dazzling Life of Josephine Baker; and many more. Robinson, based in Sacramento, is also an animator and has worked with the Sesame Street Workshop and Pixar Animation Studios.

When Carmela wakes up on her birthday, her wish has already come true—she’s finally old enough to join her big brother as he does the family errands. Together, they travel through their neighborhood, past the crowded bus stop, the fenced-off repair shop, and the panadería, until they arrive at the Laundromat, where Carmela finds a lone dandelion growing in the pavement. But before she can blow its white fluff away, her brother tells her she has to make a wish. If only she can think of just the right wish to make . . .

Told through the lens of a heartfelt sibling story, this “powerful and beautiful” (Kirkus, starred review) picture book explores what hope looks like in a migrant community. In a starred review, Publishers Weekly says, “The award-winning team behind Last Stop on Market Street portrays Carmela’s Spanish-speaking community as a vibrant place of possibility, and Robinson’s acrylic-and-cutout spreads introduce readers to street vendors, workers in the fields, and sweeping views of the sea. Sensitively conceived and exuberantly executed, Carmela’s story shines.”

Due to space limitations every attendee will need to RSVP by purchasing a $0 charge ticket. Please print tickets for each attendee and bring to the festival. Seating is first come, first served.

rsvp to reserve your seat

We will hold your pre-ordered book for pick-up at the KidFest Book Tent. Payment for book ($17.99) is due at pick-up. Their book is sure to sell out, so reserve your copy now! Email info@morristownbooks.org to make arrangements.

Note: If you cannot attend Matt & Christian’s talk, you can still pre-order their new book. Pre-orders can be signed or personalized by the author at no additional cost.