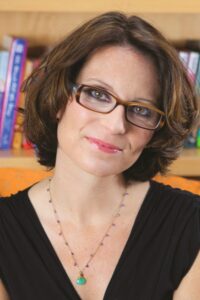 Meg Cabot was born in Bloomington, Indiana, during the Chinese astrological year of the Fire Horse, a notoriously unlucky sign, but learned at an early age that a good storyteller can always give herself a happy ending. Her 80+ books for both adults and tweens/teens have included multiple #1 New York Times best sellers, selling over 25 million copies worldwide. Her Princess Diaries series has been published in more than 38 countries and was made into two hit films by Disney. Meg’s numerous other award-winning books include the Mediator series, the Heather Wells mystery series, and Avalon High, which was made into a film for Disney Channel. Meg Cabot (her last name rhymes with habit, as in ‘her books can be habit-forming’) currently lives in Key West with her husband and various cats.

It’s the first coronation of a female monarch of Genovia in 200 years, and Her Royal Highness, Princess Olivia Grace Clarisse Mignonette Harrison, is giving you the inside scoop in this newest (illustrated!) middle-grade diary from New York Times best-selling author and illustrator Meg Cabot!

Olivia Grace Clarisse Mignonette Harrison should be having fun. Her best friend is visiting from America, her sister’s royal coronation is only three days away (the first coronation of a female ruler in two centuries), and she’s even got a new boyfriend who is actually a very smart and charming prince! But it’s hard to celebrate when her royal cousins are scheming to take over the throne. And with everyone running around, Olivia and her friends have been saddled with royal babysitting duties. Then, to make matters worse, Olivia’s snobby cousin Luisa insists on gossiping about her, especially about things that should be personal … it’s none of her business whether Prince Khalil and Olivia have kissed or not!

When did growing up royal get so complicated?!?