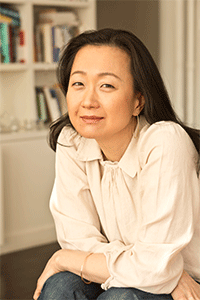 Min Jin Lee’s debut novel, Free Food for Millionaires, was one of the “Top 10 Novels of the Year” for the Times (London), NPR’s Fresh Air, and USA Today. Her short fiction has been featured on NPR’s Selected Shorts. Her writings have appeared in Condé Nast Traveler, Times (London), Vogue, Travel + Leisure, Wall Street Journal, New York Times Magazine, and Food & Wine. Her essays and literary criticism have been anthologized widely. She lives in New York City with her family.

When teenaged Sunja, the adored daughter of a crippled fisherman, falls for a wealthy stranger at the seashore near her home in Korea, he promises her the world. But when she discovers that she is pregnant––and that her lover is married––she refuses to be bought. Instead, she accepts an offer of marriage from a gentle, sickly minister passing through on his way to Japan. But her decision to abandon her home sets off a dramatic saga that will echo down through the generations, her immigrant family fighting to control their destiny in 20th-century Japan, exiled from a home they never knew.