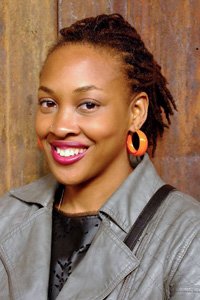 Naomi Jackson is the debut author of The Star Side of Bird Hill, which was long-listed for the Center for Fiction’s First Novel Prize and the National Book Critics Circle’s John Leonard Prize, and nominated for an NAACP Image Award. Jackson studied fiction at the Iowa Writers’ Workshop and traveled to South Africa on a Fulbright Scholarship, where she received a master’s in creative writing from the University of Cape Town. A graduate of Williams College, her work has appeared in numerous literary journals and magazines. She lives in Brooklyn, New York.

MFOB FEATURED BOOK: The Star Side of Bird Hill

This lyrical novel of community, betrayal, and love centers on an unforgettable matriarchal family in Barbados. Two sisters, ages 10 and 16, are exiled from Brooklyn to Bird Hill in Barbados after their mother can no longer care for them. They are taken in by their grandmother, a midwife and practitioner of obeah, a West Indian spiritualism.This tautly paced coming-of-age story builds to a crisis when their estranged father comes to reclaim his daughters, and their grandmother finds herself in for the battle of her life.