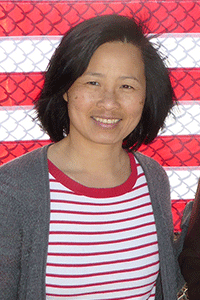 Oanh Ngo Usadi was born in Sài Gòn but grew up in an orchard in the Mekong Delta, where her family was exiled after the war. When she was eleven, the family escaped Việt Nam as part of the mass exodus of boat refugees. In 1984, they settled in a small Texas town where her father, the eternal entrepreneur, opened a bánh mì sandwich shop. Oanh’s writings have appeared in the Wall Street Journal, the New York Times, and Forbes.  She now lives in New Jersey with her husband and children.

In the aftermath of the Vietnam War, a young girl and her family were exiled from city living in Saigon to the countryside of Vietnam and ultimately escaped to a small town in Texas. Part travelogue, part family drama, this quietly affecting immigrant memoir will make you laugh, cry, and hungry all at the same time. Through each traumatic transition, Oanh Ngo Usadi retains her optimism as she and her family adapt to new environments and cultures in their journey to become Americans.