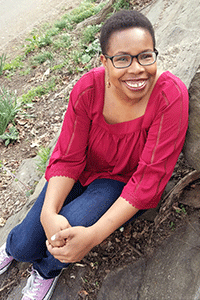 Olugbemisola Rhuday-Perkovich is, along with Audrey Vernick, the co-author of the middle-grade novels Two Naomis and Naomis Too, as well as the author of 8th Grade Superzero. She has contributed to the website Brightly and the books Open Mic: Riffs on Life Between Cultures in Ten Voices and Break These Rules: 35 YA Authors on Speaking Up, Standing Out, and Being Yourself.

Naomis Too (ages 8-12): In this sequel to Two Naomis, now that Naomi M.’s mom and Naomi E.’s dad are married, the girls have learned to do a lot of things together; however, sixth grade in a new school presents a whole new set of surprises and challenges. Trusting her gut has worked for Naomi E. all her life, and she figures that it will be an asset to her role as a Peer Mediator—until she realizes how much of the job requires the Art of Compromise, which she’s only just starting to get used to at home. Naomi M. is excited about making new friends—but she wants to keep old ones too. And when she sees that some in the school community have a hard time with the realities of “diversity in action,” she wonders if the new members of her family can see those realities as well. As the girls deal with the ups and downs of middle school and the mysteries of family dynamics, they learn that even when life and school try to drive you apart, it’s ultimately easier to face everything together.

Someday Is Now (ages 8-12): Someday Is Now tells the inspirational story of the celebrated civil rights leader, Clara Luper, who led one of the first lunch-counter sit-ins in America. As a child, Clara saw how segregation affected her life. Her journey famously led her to Oklahoma, where she and her students bravely desegregated stores and restaurants that were closed to African-Americans.

Woah! I’m really digging the template/theme of this blog.
It’s simple, yet effective. A lot of times it’s challenging to get that “perfect balance” between usability and
visual appeal. I must say that you’ve done a excellent job with this.
Additionally, the blog loads extremely quick for me on Internet explorer.
Superb Blog!

Wonderful beat ! I would like to apprentice at the same time as you amend your website, how could i subscribe for a blog site?
The account helped me a appropriate deal. I had been a little bit acquainted of this your broadcast offered bright transparent concept

What’s up it’s me, I am also visiting this web page
daily, this site is truly fastidious and the visitors are actually sharing good thoughts.

This post will help the internet users for setting up
new blog or even a blog from start to end.

Fine way of describing, and nice piece of writing to obtain facts about my presentation subject,
which i am going to present in academy.

That is really attention-grabbing, You are an overly
skilled blogger. I have joined your rss feed and look
ahead to in search of extra of your excellent
post. Additionally, I’ve shared your website in my social networks

Fine way of explaining, and nice post to take data regarding my presentation focus, which i am going to convey in academy.

This is the perfect blog for anyone who wishes to understand this topic.
You realize so much its almost tough to argue with you (not that I personally would want to…HaHa).
You certainly put a brand new spin on a subject that’s been discussed for years.
Great stuff, just excellent!

There’s a lot of people that I think would really appreciate your content.
Please let me know. Many thanks

An outstanding share! I have just forwarded this onto a friend who was doing
a little research on this. And he actually ordered
me lunch simply because I found it for him… lol. So allow
me to reword this…. Thanks for the meal!! But yeah,
thanx for spending some time to talk about this topic here on your site.

I have read so many articles or reviews concerning the blogger lovers however this
piece of writing is really a good paragraph, keep it up.

This piece of writing is actually a good one it helps
new web visitors, who are wishing in favor of blogging.

I am not sure where you’re getting your information, but good topic.

I needs to spend some time learning more or understanding
more. Thanks for magnificent info I was looking for this info for my
mission.

This post is truly a good one it assists new the web users, who are wishing for blogging.

Why visitors still make use of to read news papers when in this technological globe the whole thing is available on web?

It’s a shame you don’t have a donate button! I’d most certainly
donate to this brilliant blog! I suppose for now i’ll settle for book-marking and adding your RSS feed to my Google account.
I look forward to brand new updates and will share this site with my Facebook group.
Chat soon!

Do you mind if I quote a few of your articles as long as
I provide credit and sources back to your blog?
My blog site is in the exact same area of interest as yours and my users would definitely benefit from some of the information you present
here. Please let me know if this ok with you.
Thanks!

You made some good points there. I checked on the
internet to find out more about the issue and found most individuals will go along with your views on this web
site.

Hello There. I found your weblog using msn. That is an extremely well written article.
I will make sure to bookmark it and return to learn more
of your useful info. Thanks for the post. I’ll
definitely return.

What’s up friends, its great piece of writing concerning educationand completely
defined, keep it up all the time.

Hi there, its good article about media print, we all know media is a great
source of data.

Hey there I am so thrilled I found your weblog, I really found you by error,
while I was researching on Askjeeve for something else,
Anyways I am here now and would just like to say thanks for
a tremendous post and a all round interesting blog (I also love the theme/design), I don’t have time to read it all
at the minute but I have saved it and also added in your RSS feeds, so
when I have time I will be back to read a lot more,
Please do keep up the superb job.

Simply want to say your article is as amazing. The clearness in your post is simply
great and i could assume you’re an expert on this subject.
Fine with your permission let me to grab your feed to keep
updated with forthcoming post. Thanks a million and
please keep up the enjoyable work.

Nice post. I learn something totally new and challenging on blogs
I stumbleupon on a daily basis. It will always be exciting
to read through articles from other writers and use something from other sites.

I think this is among the most important information for me.
And i’m glad reading your article. But want to remark on some general things, The
site style is ideal, the articles is really great : D.
Good job, cheers

This information is priceless. Where can I find out more?

Amazing! Its truly awesome paragraph, I have got much clear
idea about from this piece of writing.

If some one wants to be updated with most recent technologies
therefore he must be pay a visit this site and be up to date every day.

An outstanding share! I’ve just forwarded this onto a colleague
who had been conducting a little homework on this.
And he in fact bought me breakfast because I stumbled upon it
for him… lol. So let me reword this…. Thank YOU for the meal!!
But yeah, thanx for spending the time to talk about this
matter here on your web page.

Hello to all, how is all, I think every one is getting more from
this website, and your views are fastidious in favor of new
users.

I have read so many articles on the topic of the blogger lovers but this paragraph is genuinely a fastidious
post, keep it up.