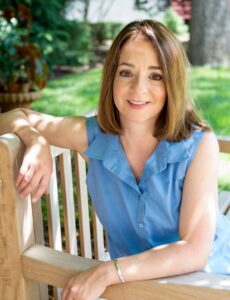 Pam Jenoff is the author of several novels, including her most recent, The Lost Girls of Paris and The Orphan’s Tale, both instant New York Times best sellers, and The Kommandant’s Girl, which received widespread acclaim, earned her a nomination for the Quill Awards, and became an international best seller. She previously served as a foreign service officer for the U.S. State Department in Europe, as the special assistant to the secretary of the Army at the Pentagon and as a practicing attorney at a large firm and in-house. She received her J.D. from the University of Pennsylvania, her master’s degree in history from Cambridge University and her bachelor’s degree in international affairs from The George Washington University. Pam Jenoff lives with her husband and three children near Philadelphia where, in addition to writing, she teaches at Rutgers Law School.

While passing through Grand Central Terminal on her way to work early one morning in 1946, Grace Healey finds an abandoned suitcase tucked beneath a bench. Her curiosity compels her to open the suitcase, where she discovers a dozen photographs of different women. Grace soon learns that the suitcase belonged to a woman named Eleanor Trigg, leader of a network of female secret agents who were deployed out of London during the war. Twelve of these women were sent to Occupied Europe as couriers and radio operators to aid the resistance, but they never returned home, their fates a mystery.

Setting out to learn the truth behind the women in the photographs, Grace finds herself drawn to a young mother turned agent named Marie, whose daring mission overseas reveals a remarkable story of friendship, valor, and betrayal.