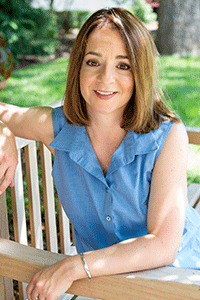 Pam Jenoff is the New York Times best-selling author of The Orphan’s Tale. She has authored eight other novels, including the international best seller, The Kommandant’s Girl, which was nominated for a Quill award. Jenoff’s novels are based on her experiences working at the Pentagon and also as a diplomat for the State Department. She lives in southern New Jersey with her husband and three children where, in addition to writing, she teaches law school.

Sixteen-year-old Noa has been cast out in disgrace after becoming pregnant by a Nazi soldier and being forced to give up her baby. But when Noa discovers a boxcar containing dozens of Jewish infants bound for a concentration camp, she snatches one of the babies and flees into the snowy night, finding refuge in a German circus. Noa must learn the flying trapeze act so she can blend in undetected, spurning the resentment of the lead aerialist, Astrid. Ferocious rivals at first, Noa and Astrid come to forge a powerful bond––but they must eventually decide whether or not it is worth keeping. Will the secrets that burn between them destroy everything?