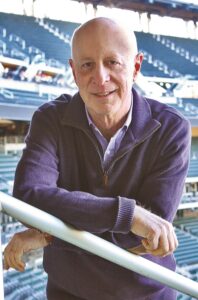 Paul Goldberger, a contributing editor at Vanity Fair, began his career at The New York Times, where he was awarded the Pulitzer Prize for distinguished criticism for his writing on architecture. Later, and for 15 years, he was architecture critic for The New Yorker. He is the author of many books, most recently Building Art: The Life and Work of Frank Gehry and Why Architecture Matters. He teaches at the New School and lectures widely around the country on architecture, design, historic preservation, and cities. He and his wife live in New York City.

An exhilarating, splendidly illustrated, entirely new look at the history of baseball: told through the stories of the vibrant and ever-changing ballparks where the game was and is staged, by the Pulitzer Prize-winning architectural critic.

From the earliest corrals of the mid-1800s (Union Grounds in Brooklyn was a “saloon in the open air”), to the much mourned parks of the early 1900s (Detroit’s Tiger Stadium, Cincinnati’s Palace of the Fans), to the stadiums we fill today, Paul Goldberger makes clear the inextricable bond between the American city and America’s favorite pastime.