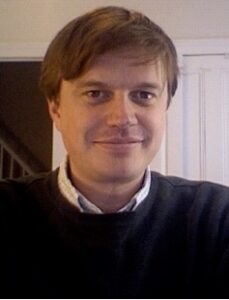 Paul Noth’s cartoons have appeared regularly in The New Yorker since 2004. He has created short animated films for Late Night with Conan O’Brien and has been an animation consultant for Saturday Night Live. He is the author of How to Sell Your Family to the Aliens and How to Properly Dispose of Planet Earth.

MFOB FEATURED BOOK: How to Win the Science Fair When You’re Dead

It’s safe to say Happy Conklin Jr. is the only 10-year-old who accidentally sold his entire family to aliens. And he might have opened a black hole in the middle of class when trying to impress his lab partner. But now he faces the biggest threat of all — Grandma.

Hap’s Grandma isn’t like normal grandmas — she’s trying to overthrow the Galactic Emperor to rule overall, and she thinks Hap is her perfect partner in crime. Hap knows he has to stop her to save the universe. But that’s easier said than done, what with giant robots and the like coming after him, and he’ll need the help of his family, friends, and some very unlikely allies to do it.