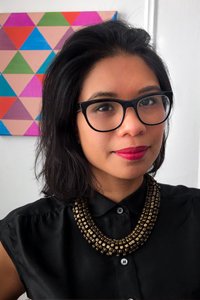 Rhoda Belleza was raised in Los Angeles, where she grew up writing X-Files fanfiction and stuffing her face with avocados. When she’s not writing, Rhoda obsesses over nail art tutorials, watches kung fu movies, and sews together crooked things that pass for clothes. She’s a children’s editor at a publishing house and writes from a sunny Brooklyn apartment stuffed with far too many bikes and far too many shoes. Empress of a Thousand Skies is her debut novel.

Empress: Rhee, also known as Crown Princess Rhiannon Ta’an, is the sole surviving heir to a powerful dynasty. She’ll stop at nothing to avenge her family and claim her throne. Fugitive: Aly has risen above his war refugee origins to find fame as the dashing star of a DroneVision show. But when he’s falsely accused of killing Rhee, he’s forced to prove his innocence to save his reputation – and his life. Madman: With planets on the brink of war, Rhee and Aly must confront a ruthless evil that threatens the fate of the entire galaxy. The New York Times Book Review raved, “Intergalactic political intrigue, family betrayal and coveted thrones feature in this space opera story… real-world analogues and social commentary make [it] an important and relevant novel.”