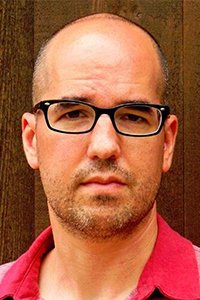 Final Girls is the first thriller from Riley Sager, a pseudonym for an author who has previously published under another name. Riley is a native of Pennsylvania and a writer, editor, and graphic designer who lives in Princeton, New Jersey.

“The first great thriller of 2017 . . .” –Stephen King
Ten years ago, college student Quincy Carpenter went on vacation with five friends and came back alone, the only survivor of a horror movie–scale massacre. In an instant, she became a member of a group of similar survivors known as the Final Girls. Lisa, who lost nine sorority sisters to a college dropout’s knife; Sam, who went up against the Sack Man during her shift at the Nightlight Inn; and now Quincy, who ran bleeding through the woods to escape Pine Cottage and the man she refers to only as Him. The three girls are all attempting to put their nightmares behind them. That is, until Lisa, the first Final Girl, is found dead in her bathtub and Sam, the second, appears on Quincy’s doorstep. When new details about Lisa’s death come to light, Quincy’s life becomes a race against time as she tries to unravel Sam’s truths from her lies, and, most crucially, remember what really happened at Pine Cottage.

Marvel motion pictures are a great means to invest your downtime. They have lots of action, journey, and also humor. You can enjoy them on the internet free of cost on Wonder’s website.The Wonder Cinematic Cosmos is a series of superhero films based on characters that appear in comics released by Marvel Comic books. The MCU is the shared universe in which all of the films are established.

Hi morristownbooks.org administrator, Your posts are always well-timed and relevant.