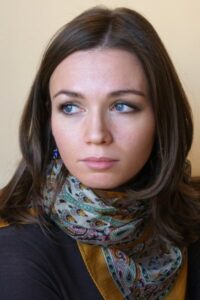 S. A. Chakraborty is the author of the internationally best-selling novel The City of Brass, nominated for the Locus, World Fantasy, Crawford, and Campbell awards. When not buried in books about Mughal miniatures and Abbasid political intrigue, she enjoys hiking, knitting, and recreating unnecessarily complicated medieval meals for her family.

In the spellbinding sequel to The City of Brass, Nahri must forge a new path for herself without her guardian’s protection or the counsel of the prince she considered a friend. But even as she embraces her heritage, she’s been trapped in Daevabad still reeling from battle and under the close watch of a king who rules from the throne that once belonged to her family. Meanwhile, Prince Ali has been exiled for defying his father.

Hunted by assassins, adrift on the unforgiving copper sands of his ancestral land, he is forced to rely on the frightening abilities the Marid — the unpredictable water spirits — have gifted him. As a new century approaches and the djinn gather within Daevabad’s towering brass walls, a threat brews unseen in the desolate north. It’s a force that would bring a storm of fire straight to the city’s gates and one that seeks the aid of a warrior trapped between worlds.