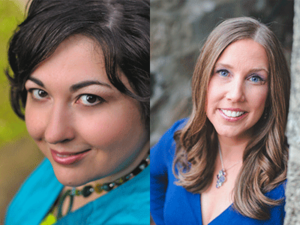 Stephanie Dray is a New York Times, Wall Street Journal and USA Today best-selling author of historical women’s fiction. Her award-winning work has been translated into eight languages and tops lists for the most-anticipated reads of the year. Before she became a novelist, she was a lawyer and a teacher. Now she lives near the nation’s capital with her husband, cats, and history books.

Laura Kamoie is a New York Times, USA Today, and Wall Street Journal best-selling author of historical women’s fiction. Until 2013, Laura worked as an associate professor of history at the U.S. Naval Academy, where she taught early American history and authored two nonfiction books of history. She lives amid the colonial charm of Annapolis, Maryland, with her husband and daughters.

From the New York Times best-selling authors of America’s First Daughter comes the epic story of Eliza Schuyler Hamilton—a revolutionary woman who, like her new nation, struggled to define herself in the wake of war, betrayal, and tragedy. Haunting, moving, and beautifully written, the novel is based on thousands of letters and original sources Dray and Kamoie uncovered to tell Eliza’s story as it’s never been told before—not just as the wronged wife at the center of a political sex scandal—but also as a founding mother who shaped an American legacy in her own right.