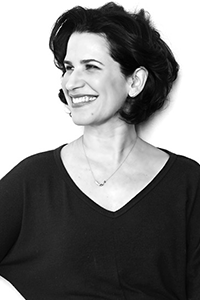 Susie Jaramillo is an author, artist, entrepreneur, and mom. She is co-founder and chief creative officer of Encantos Media Studios and the creator of canticos, a baby brand inspired by Latino nursery rhymes featuring bilingual board books, apps, videos and more. Her first book Los Pollitos Dicen has received starred reviews from Kirkus, Publishers Weekly and SLJ. She has gone on to publish five more books in the Canticos Series. Susie lives in Brooklyn.

The newest book in this series of bilingual nursery rhymes is perfect for Halloween! Little Skeletons / Esqueletitos is inspired by the traditional Latin American song Los Esqueletitos (Calaveras) Salen de la Tumba, with art in the style of the famous Mexican Calavera woodcut prints. Little Skeletons / Esqueletitos has a unique, interactive, accordion design that presents the Spanish version of the book in one direction and its English adaptation in the other. Children can sing the song straight through, move the hands of the clock, or shut off the lights to watch the little skeletons glow in the dark!

Blog sites can be developed making use of complimentary blogging platforms such as WordPress, Tumblr, and also Blogger. These systems enable you to produce an account as well as start blogging right away without any technical knowledge of coding or style.