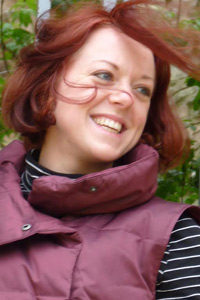 V. E. Schwab’s first novel, Vicious, debuted to critical praise and reader accolades. Her fantasy novel A Darker Shade of Magic began the popular series that has continued with the New York Times best-seller A Gathering of Shadows, and the eagerly anticipated A Conjuring of Light (due out February 2017). Schwab is also the author of acclaimed YA novels This Savage Song and The Near Witch, along with middle-grade titles. The Independent calls Schwab “the natural successor to Diana Wynne Jones” and someone who has “an enviable, almost Gaiman-esque ability to switch between styles, genres, and tones.”

Kell is a Travelers-magician with a rare, coveted ability to travel between parallel universes, connected by one magical city. There’s Grey London, dirty and boring, without any magic. Red London, where life and magic are revered. White London—a place where people fight to control magic, and the magic fights back. And once upon a time, there was Black London. But no one speaks of that now. Kell secretly smuggles people willing to pay for even the smallest glimpses of a world they’ll never see. It’s a defiant hobby . . . with dangerous consequences.

Your style is really unique in comparison to other
people I have read stuff from. Thank you for posting when you’ve
got the opportunity, Guess I will just book mark this web site.

You really make it appear so easy together with your presentation but
I to find this matter to be really something that I believe I’d never understand.
It kind of feels too complicated and very wide for me.

I am looking ahead on your subsequent put up, I’ll attempt to
get the grasp of it!

After looking over a handful of the blog posts on your website, I seriously appreciate your way of writing a
blog. I bookmarked it to my bookmark webpage list and
will be checking back soon. Take a look at my web site too and tell me how you feel.

Hey! This is kind of off topic but I need some help from
an established blog. Is it very hard to set up
your own blog? I’m not very techincal but I can figure things out pretty fast.
I’m thinking about creating my own but I’m not sure where to begin. Do you have any tips or suggestions?
Cheers

I am really thankful to the owner of this web page who has shared this wonderful piece of writing at at this time.

This information is priceless. How can I find out more?

Superb post however I was wondering if you could write
a litte more on this topic? I’d be very thankful if
you could elaborate a little bit more. Bless you!

I need to to thank you for this excellent read!! I absolutely
loved every bit of it. I have got you book marked to look at new stuff you post…

I am curious to find out what blog platform you’re using?

I’m experiencing some minor security issues with my latest site and I’d like to find something more risk-free.
Do you have any solutions?

What’s Happening i am new to this, I stumbled upon this I’ve found It positively useful and it has helped me out loads.
I am hoping to contribute & assist different users like
its helped me. Good job.

Hi my loved one! I wish to say that this post is
awesome, nice written and come with approximately all vital infos.

Hi, i think that i saw you visited my blog thus i came to “return the favor”.I am trying
to find things to enhance my web site!I suppose its ok to use a few of your
ideas!!

Do you have a spam issue on this blog; I also am a blogger, and I was wondering
your situation; many of us have developed some nice procedures and we are looking
to swap techniques with other folks, be sure to shoot me an e-mail if interested.

I loved as much as you’ll receive carried out right here.
The sketch is attractive, your authored material stylish.
nonetheless, you command get bought an shakiness
over that you wish be delivering the following.
unwell unquestionably come further formerly again as exactly the same
nearly a lot often inside case you shield this
increase.

Great article! That is the kind of information that are supposed
to be shared around the web. Disgrace on the search engines
for not positioning this post higher! Come on over and seek advice
from my website . Thanks =)

Nice blog here! Also your site loads up very fast!
What host are you using? Can I get your affiliate link to your host?

I wish my site loaded up as quickly as yours
lol

Thanks for finally talking about > V.E. Schwab – Morristown Festival of Books < Loved it!

Its such as you learn my thoughts! You seem to grasp a lot about this,
such as you wrote the e book in it or something.
I feel that you just could do with some percent to force the message home a little bit, but instead of that, this is fantastic blog.
A fantastic read. I’ll certainly be back.

Very good post! We are linking to this great post on our site.
Keep up the great writing.

Thanks on your marvelous posting! I quite enjoyed reading it, you could
be a great author.I will make certain to bookmark your
blog and may come back later in life. I want to encourage you to ultimately continue your great work, have a nice afternoon!

I think the admin of this site is actually working hard in support of his site, for the reason that here every data is quality
based data.

I’m amazed, I have to admit. Seldom do I come across a blog that’s both equally educative and amusing,
and without a doubt, you’ve hit the nail on the head.
The problem is something that too few men and women are speaking intelligently about.
I’m very happy I came across this during my search for something concerning this.

I know this website offers quality dependent posts and
extra information, is there any other web page which presents these information in quality?

This is my first time pay a quick visit at here and i am genuinely
happy to read everthing at single place.

Amazing! This blog looks exactly like my old one! It’s on a completely different subject but it has pretty much the same page layout and design. Superb choice of
colors!

Wonderful blog! I found it while searching on Yahoo News.
Do you have any suggestions on how to get listed in Yahoo News?
I’ve been trying for a while but I never seem to get there!
Many thanks

I think this is among the most vital information for me.

And i am glad reading your article. But should remark on some
general things, The web site style is perfect, the articles is
really great : D. Good job, cheers

This paragraph will assist the internet people for creating new
blog or even a blog from start to end.