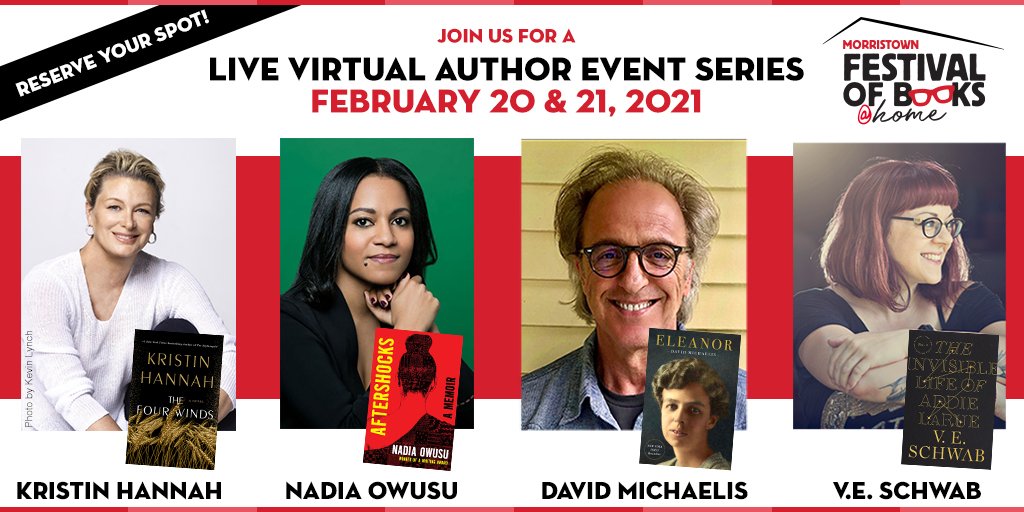 Thank you for making our new Morristown Festival of Books @Home initiative such a success!

We were thrilled to welcome best-selling authors Kristin Hannah, V.E. Schwab, David Michaelis, and debut memoirist Nadia Owusu, our incredible moderators Carol Fitzgerald, Bill Goldstein, and Dhonielle Clayton, and the thousands of book lovers who joined us from all over the country!

We are incredibly grateful for the contributions of our sponsors who supported this event.

Visit our YouTube channel to enjoy recordings of the free sessions: Event Videos.

Registration is now closed but stay tuned for news of future events like this!

Kristin Hannah is an award-winning and bestselling author of more than 21 novels. In addition to her newest book, The Four Winds, she has written the international blockbusters The Nightingale and The Great Alone, as well as Winter Garden, Night Road, and Firefly Lane.

The film of Hannah’s much-loved novel The Nightingale (published in 43 languages), starring Dakota Fanning and Elle Fanning, is slated for December 2021, and the 10-part Netflix series based on Firefly Lane was an immediate hit upon its release in February 2021. The Great Alone has also been optioned for the screen. Renowned for her strong women characters, Hannah’s books are read, discussed, and revered by book clubs all over the country.

Kristin is a former-lawyer-turned writer who lives in the Pacific Northwest with her husband.

The #1 New York Times bestseller The Four Winds is an epic novel of love and heroism and hope, set against the backdrop of one of America’s most defining eras—the Great Depression.

Nadia Owusu is a Brooklyn-based writer and urban planner. She is the recipient of a 2019 Whiting Award. Her lyric essay “So Devilish a Fire” won the Atlas Review chapbook contest. Her writing has appeared or is forthcoming in the New York Times, the Washington Post’s The Lily, Literary Review, Electric Literature, Epiphany, and Catapult. Aftershocks is her first book.

In the tradition of The Glass Castle, Aftershocks is a deeply felt memoir about the push and pull of belonging, the seismic emotional toll of family secrets, and the heart it takes to pull through.

Eleanor chronicles not only the timeline of her life and achievements, such as guiding the drafting of the United Nations’ Universal Declaration of Human Rights, but gives us a universally relatable story of a great woman’s lifelong search for love. Michaelis has a lively cinematic style and the lengthy odyssey flies by, as many of the best biographies do, and reaffirms her as an epic perennial figure of democracy whom the world treasures.

Victoria “V. E.” Schwab is the #1 New York Times bestselling author of more than 20 books, including the acclaimed Shades of Magic series, Villains series, Monster of Verity duology, Cassidy Blake series, and The Invisible Life of Addie LaRue. Her work has received critical acclaim and been featured in the New York Times, Entertainment Weekly, Washington Post and more, translated into more than two dozen languages, and has been optioned for television and film. When she’s not haunting Paris streets or trudging up English hillsides, she lives in Edinburgh, Scotland and is usually tucked in the corner of a coffee shop, dreaming up monsters.

The Invisible Life of Addie LaRue is a stunning, sweeping story along the lines of The Time Traveler’s Wife or Kate Atkinson’s Life After Life. This is Schwab’s tour de force—a gorgeous, next-level book about the defiant joy that takes readers across centuries exposing them to history and art through Addie’s eyes. 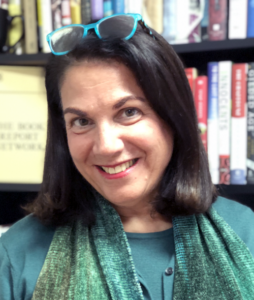 Carol Fitzgerald is the president and founder of The Book Report Network (TBRN)—a group of websites about books and authors, including Bookreporter.com and ReadingGroupGuides.com, that have become the gathering places for a large and devoted community of booklovers since 1996.

In addition, the company’s Authors on the Web division provides website design and development, newsletter design and strategy, as well as marketing consultation for authors and publishers. To date, the company has built websites for more than 350 authors and continues to maintain more than 100 websites. 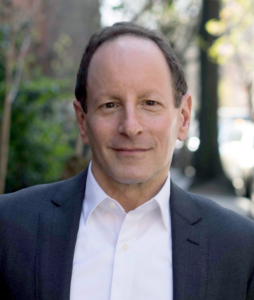 Bill Goldstein reviews books and interviews authors for NBC’s “Weekend Today” in New York, and was the founding editor of the New York Times books website. A graduate of the University of Chicago, Goldstein received a PhD in English from the City University of New York Graduate Center.

He is writing a biography of Larry Kramer, to be published by Crown, and worked on the book as a 2019-2020 fellow at the Cullman Center for Scholars and Writers at The New York Public Library. From 2010-19, Goldstein was the curator of public programming at Roosevelt House, the public policy institute of Hunter College, which is located in the townhouse on East 65th Street where Franklin and Eleanor Roosevelt lived from 1908 into their White House years. 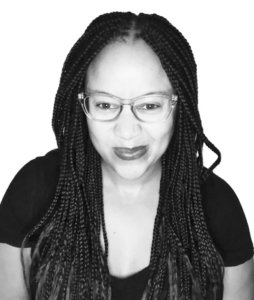 Dhonielle Clayton is the New York Times bestselling author of The Belles series and the co-author of the Tiny Pretty Things duology, which is now a Netflix original series. She hails from the Washington, D.C. suburbs on the Maryland side. She taught secondary school for several years and is a former elementary and middle school librarian.

Ms. Clayton is COO of the non-profit We Need Diverse Books, and owner of CAKE Literary, a creative story kitchen and IP content company. She runs the science fiction and fantasy book club Black Girls with Magic & Books. She’s an avid traveler, and always on the hunt for magic and mischief. Next up: BlackOut, Shattered Midnight, The Marvellers, and The Rumor Game.

This two-day virtual event was generously sponsored by:

Q: If I was unable to attend the session I registered for, will a recording be made available to see at a later date?
A: Yes. The sessions were recorded and all registrants received an email with a link to view the recorded session online.

Q: If I ordered from Bookends, when will I receive my book?
A: Your book was shipped within 48 hours of your order placement. If you have not yet received your order, please contact info@morristownbooks.org for assistance.

Q: What is the status of the Morristown Festival of Books weekend, usually held in October?
A: We are planning for a Festival on Oct. 8 & 9, 2021, though its scope and format are yet to be determined as we keep a careful eye on public health guidelines. We will have updates in the coming months. Be sure to stay apprised by signing up for our Newsletter at the bottom of this page.

Q: Can I still support the Festival even if I was not able to attend one of these virtual events?
A: Yes! We welcome and greatly appreciate a donation of any size to support the Morristown Festival of Books. Click here to visit our Sponsorship page on the Community Foundation of New Jersey Web site. Thank you!