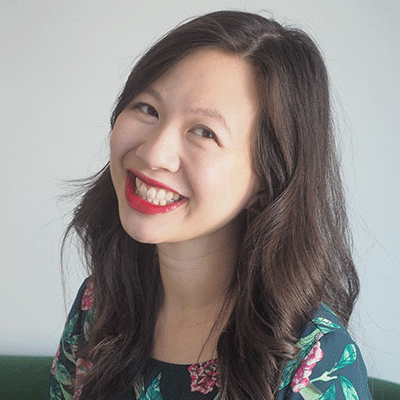 Elizabeth Lim is The New York Times and indie bestselling author of Six Crimson Cranes, Spin the Dawn, and two Disney Twisted Tales. She grew up in the San Francisco Bay Area, where she was raised on a hearty diet of fairy tales, myths, and songs. Before becoming an author, Lim was a professional film and video game composer, and she still tends to come up with her best book ideas when writing near a piano. She lives in New York City with her husband and two daughters.

Six Crimson Cranes tells the story of Shiori, the only princess of Kiata, who has a secret: forbidden magic runs through her veins. Normally she conceals it well, but on the morning of her betrothal ceremony, Shiori loses control. At first, her mistake seems like a stroke of luck, forestalling the wedding she never wanted, but it also catches the attention of Raikama, her stepmother.

Raikama has dark magic of her own, and she banishes the young princess, turning her brothers into cranes, and warning Shiori that she must speak of it to no one: for with every word that escapes her lips, one of her brothers will die.

Penniless, voiceless, and alone, Shiori searches for her brothers, and, on her journey, uncovers a conspiracy to overtake the throne. Only Shiori can set the kingdom to rights, but to do so she must place her trust in the very boy she fought so hard not to marry. And she must embrace the magic she’s been taught all her life to contain—no matter what it costs her.

And in The Dragon’s Promise, Princess Shiori made a deathbed promise to return the dragon’s pearl to its rightful owner, but keeping that promise is more dangerous than she ever imagined. She must journey to the kingdom of dragons, navigate political intrigue among humans and dragons alike, fend off thieves who covet the pearl for themselves and will go to any lengths to get it, all while cultivating the appearance of a perfect princess to dissuade those who would see her burned at the stake for the magic that runs in her blood. The pearl itself is no ordinary cargo; it thrums with malevolent power, jumping to Shiori’s aid one minute, and betraying her the next—threatening to shatter her family and sever the thread of fate that binds her to her true love. It will take every ounce of strength Shiori can muster to defend the life and the love she’s fought so hard to win.